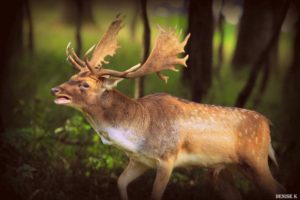 Fallow deer, introduced by the Normans soon after their arrival in 1169, were up to recently our most common deer species but have been overtaken by Sika deer, based on unverified data produced by Government from deer stalker cull returns. Fallow deer are quite pretty to look at, given the range of different summer spotted coat colours of both sexes and the palmate male antlers, they were a common emparked deer species during the latter Medieval period in Britain and Ireland. This species is the direct descendant of the giant ‘Irish’ deer (Megaloceros giganteus).

While some claims have been made, the number of wild Fallow Deer in Ireland are unknown as no national deer census have been carried out. Many of our now wild Fallow escaped in the early 20th century. Along with Sika deer, they are now among our most widespread species of deer and are found in most woodlands countrywide, both hill and lowland. Fallow have a very keen sense of smell and are acutely aware of any foreign noise. In hunted areas or where deer are disturbed it is easier to find them grazing at dawn or before dusk and one should approach carefully from the downwind side. Fallow bucks are easiest to see in October during the rut. They tend to use the same rutting ground each year and the rutting area would have a strong musky smell with some scraping of the ground and tree bark damage. In some cases a wallow is created from the scraping which is a rutting area containing mud and urine deposited by the bucks producing a intense musky smell.

This is the only Irish species of deer where the bucks have palmate (broad flattened) antlers. The coat coloration is quite variable including Black, White, Brown, Yellowish etc. With the exception of Black and White, the rest have a white underbelly and white rump patch with a black line surround and a black line from the top of the shoulder to the tip of the tail. Common Fallow (the most numerous) are light brown with white spots in summer and this greys and darkens in the winter. Size wise, the fallow is between the Sika and the Red. With adults bucks weighing about 100 lbs or about 55 kg carcass weight and Does weighting 40-45 kg live weight. Adult males are larger in terms of body size than adult females. The bucks reach their maximum body weights just before the rut in October. Whereas the does, reach their maximum body weights just before birth of their offspring, where they may weight up to 55 kg.

Fallow are a herd deer but group size is influenced by habitat and time of the year; only during the rut do the bucks and does come together, to mate. They favour a varied habitat with cover and grazing, that is mixed deciduous woodland or pine with grazing. They are primarily grazers and will graze all year round, however they will eat herbs, leaves, fungi, acorns, young deciduous shoots and farm crops (sugar beet). Bucks grow antlers in late Spring that have a soft skin covering called velvet. Antler growth begins shortly after the antlers are shed in Spring and these grow until August, at which time the velvet dies and is scraped off. The antlers are fully grown in August and will remain until they are shed in March and April. Antler size to some extent depends on age but more importantly on the deer’s health, nutrition and genetics. In the wild, the best heads are found on 7-9 year old animals. 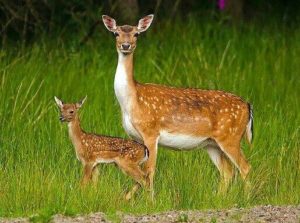 The breeding season (rut) peaks during the month of October. The timing of the rut is controlled by the length of the day. During the rut the bucks move into the females’ areas, having lived apart for 10 months, and competition for females can be intense. Fallow bucks will fight quite aggressively for dominance and may aggressively lock antlers and push or wrestle. The bucks emit sounds (grunts) during the rut which is rhythmic and cough-like. It is not just the winning bucks of fights than get to choose their doe mates, does also display female mating choice, where they will visit numerous bucks assessing them before mating occurs. Scrapes and markings can be found in rutting areas which are scented by glands on the bucks’ faces. Does may breed at a year and a half, if pregnancy does not occur, ovulation (heat) will repeat again in 21 days later until pregnancy occurs. Pregnancy in a Doe lasts 33 weeks and fawns are born in June. It is important to note that fawns do not follow their mother for two weeks. While the mother is off grazing the fawns are left lying in cover. Such fawns are not abandoned and should not be touched or removed. Fawns may continue to suckle until the next sibling is born. Does and their fawns are brought back into the doe herd (large groups) during August, where socialisation of the fawns and does occur with each other.

Fallow deer are a protected species under the Wildlife Acts and may only be hunted with a section 29 licence from the National Parks and Wildlife Service. Fallow bucks may be hunted from the 1st of September until December 31st and Does may be hunted from the 1st of November to the February 28th between the hours of, 1 hour before official sunrise and 1 hour after sunset. It is illegal to hunt deer at night or with the use of dogs.