Learn About Deer for the Junior Education Cycle

Home » Learn About Deer for the Junior Education Cycle 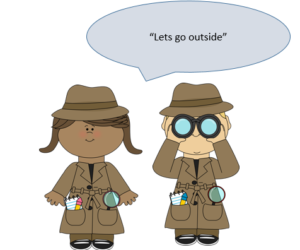 Learn about deer with the Irish Deer Commission

“Learn about deer” is part of our educational programme for the junior education cycle. This page is full of useful and fun tips, videos, colouring pages and facts about our wild deer for parents and teachers, enjoy!

Ireland has three species of wild deer – Red deer, Fallow deer, and Sika deer. Deer are Ireland’s largest land mammal. While we do not know how many deer we have in Ireland (we have never counted them), we know they can be found in every county in Ireland. Deer normally live in forests, mountains, and National Parks, but they can also be found in Parks such as the Phoenix Park in Dublin.

Red deer are our largest and the only native deer species to Ireland. The Red deer has a rich red colored coat, darkening down to a greyish brown in winter. A mature stag carries a large set of antlers. A fully-grown Red stag can stand 120cm (48”) high at the shoulder and can weigh anything up to 240kg.

Our Neolithic ancestors or Stone Age people brought red deer to Ireland in boats around 5000 years ago. They used deer for food and for clothing.

Red deer antlers are branching, they can have 12 or 14 points but sometimes more.

Red Deer: A male is called a Stag

A Female is called a Hind

A new-born is called a Calf 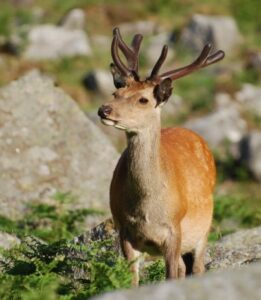 Japanese Sika Stag. (above left by Joe Murphy) a Co Wicklow Stag is in his summer coat and (above right by Joe Murphy) the stag has changed into his winter coat. The change is referred to as molting, which happens in the spring and autumn.

Sika deer originated from the Japanese Islands in north eastern Asia and were introduced to Ireland in 1860. The sika coat is light brown with spots in the summer, but changes to grey browns and almost black in winter. Sika are a small deer with stags measuring up to 80 cm at the shoulder and weighting between 50-60kg. Like Red deer, Sika have pointed or spike like antlers.

Sika Deer: A male is called a Stag

A Female is called a Hind

A new-born is called a Calf 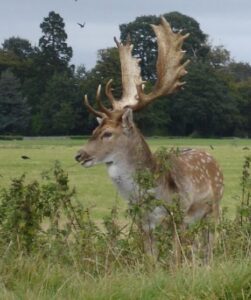 Fallow Bucks in summer coats, note the palmated “flattened” antler (above by Joe Murphy). Fallow can be seen quite easily in the Phoenix Park in Dublin.

This is the only Irish species of deer where the bucks have palmated (broad flattened) antlers. The coat coloration is quite variable including Black, White, Brown, and Yellowish etc. Common Fallow are light brown with white spots in summer and turns grey and darkens in the winter. Fallow deer are an average size deer, between the Sika and the Red. With adult bucks weighing about 80kg.

Fallow Deer: A male is called a Buck

A Female is called a Doe

A new-born is called a Fawn

The Breeding Season (known as the Rut)

The breeding season (rut) for deer begins in September and ends in late October. The timing of the rut is controlled by the length of daylight. During September, aggression between stags and bucks is more common. Mature stags and bucks are increasingly impatient with each other. They roar (Red deer) or grunt (Fallow deer) or screech (Sika deer) to warn off other stags and bucks and to attract females. Each stag or buck is seeking to gather as many females as possible to breed with. During the rut, red and sika stags will make a wallow in soft earth, thresh the vegetation with his antlers, as well as roar and fight in contest with competing males.

Stags and bucks will lock antlers and fight by pushing their opponent, normally the heaviest male wins the fight and not the male with the biggest antlers. Often stags and bucks can be injured during these fights. Once the rut is over stags and bucks become friends and live together until the next rut. (Above left the skeleton of a Giant Irish Deer at the Natural History Museum, Dublin photograph by Joe Murphy).

The Giant Irish Deer is believed to have roamed the lowlands of central and eastern Ireland. Adult stags weighed over 1 tonne, whereas the females weighed about a half a tonne. Both stags and hinds (females) stood at 1.8 metres  at the shoulder and the stags only bore antlers with a width of up to 4 metres, (weighting up to 45kg) are the largest antlers know to have existed on any deer species. They were palm like antlers, like those of Fallow deer, it is nearest living direct descendant.

The giant ‘Irish’ deer was present in Ireland before and after the last great Ice Age. However, as the climate warmed after the retreat of the last Ice Age. The change to arctic like weather conditions led to a significant change in the vegetation.  The giant deer could not adapt at the same pace of the changing vegetation and could not migrate (move) elsewhere as Ireland was an island. Thus, their extinction occurred in Ireland.

All material on this page and related attachments are copyright by the Irish Deer Commission and may be only used with the owners permission.